On Thursday Little Angels Preschool children engaged in fire cooking. We arranged the children into small groups of four and the small groups sat around a wooden pallet. We discussed the Golden Rules with the children so they had an understanding of what was expected of them, the rules included listening to the ladies at all times, sit still around the pallet, not to put your hands in the fire, put the food onto the skewer and hold the skewers at the other end away from the food, do not lean over the fire and only put your food over the fire to cook, when you food is cooked blow on it 10 times to cool it before eating and only the ladies will touch the matched and light the fire. Using baking trays we added fire lighters, cotton wool and kindling we then set the it alight and waited patiently for the fire to get hot.

The Little Angels Preschool children observed the marshmallow bubbling and softening and in places the marshmallow was changing colour slightly to a shade of brown. The children remembered to blow on the marshmallow 10 times to cool it before eating it. The children explored the texture of the marshmallow describing it as warm, soft, gooey and stretchy. The staff gave the children little responsibilities and instructions to fetch more cotton wool and kindling for the fires, when they started to go out. The children were asked to walk to the box where the items were and walk back to the fire where they were sitting sensibly.

The Little Angels Preschool children were encouraged to break off small pieces of chocolate from the chocolate bar and place them into the foil tray, once they had do this a staff member then placed the foil tray onto the fire. We used the wooden skewer to stir the chocolate as it was melting. The children observed the chocolate changing shape and texture and they then they dipped the marshmallow and toasted bread into the melted chocolate. 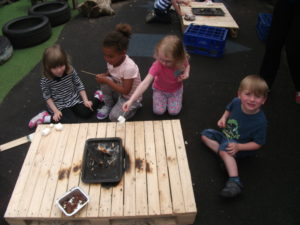 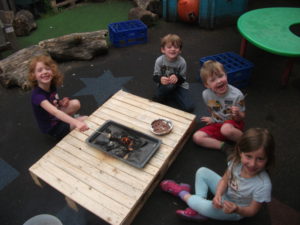 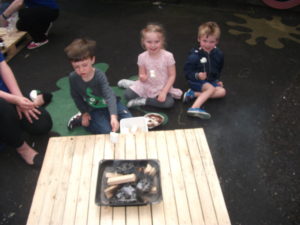 This website uses cookies to improve your experience while you navigate through the website. Out of these, the cookies that are categorized as necessary are stored on your browser as they are essential for the working of basic functionalities of the website. We also use third-party cookies that help us analyze and understand how you use this website. These cookies will be stored in your browser only with your consent. You also have the option to opt-out of these cookies. But opting out of some of these cookies may affect your browsing experience.
Necessary Always Enabled
Necessary cookies are absolutely essential for the website to function properly. This category only includes cookies that ensures basic functionalities and security features of the website. These cookies do not store any personal information.
Non-necessary
Any cookies that may not be particularly necessary for the website to function and is used specifically to collect user personal data via analytics, ads, other embedded contents are termed as non-necessary cookies. It is mandatory to procure user consent prior to running these cookies on your website.
SAVE & ACCEPT
MENU
Loading Comments...